Turkish Constitution Article 42, paragraph 9
“In the educational institutions and schools as a mother tongue, no other language can be taught and trained to Turkish nationals than Turkish.”

Kurdish Private Schools
There are a few private schools that are allowed to teach Kurdish. However, most Kurdish families can not afford financially to send their children to a private school.

After the coup
The closure of numerous educational institutions after the failed military coup of 15 July 2016 was allegedly only directed against the Islamic Gülen movement.

However, the occasion was also used to occasionally close down institutions that are not related to the Gülen movement, but which teach the Kurdish language .

For example, on 23 July 2016 the DİCLE FIRAT Koleji in Diyarbekir was closed by the police. Sabahattin Korkmaz – the founder and director of the school – stressed that the school has no connection to the Gülen movement.

On 19.11.2016, the only Kurdish-educating primary school in Van was closed by Turkish authorities. 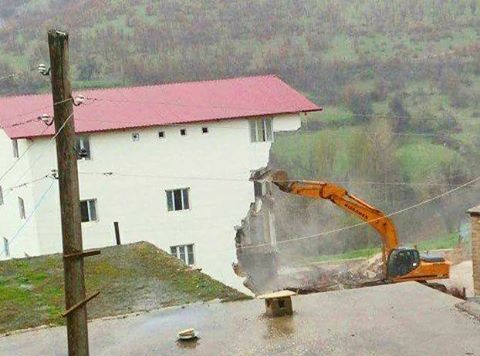 With heavy equipment, they demolished the four-story school building that was built in 2014 to teach the children in their mother tongue Kurdish. It was the first public (communal) school of its kind.

Lice Prosecutor’s Office issued a demolition order for the school in 2014 but revoked the decision in the face of the resistance by the people.